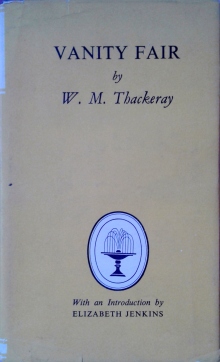 This was my first “old-big-classic novel” read in English. The main characters are Rebecca “Becky” Sharp and Amelia “Emmy” Sedley, two friends that couldn’t be more different. Rebecca is an orphan from uncertain origin (her father was an artist! her mother was a dancer! such a scandal, such an outrage!) and, as we’ll see along the story, uncertain moral sense. Penniless and friendless, as she likes to call herself, she spends some days with the Sedleys, before going to take a place as a governess.  Amelia, on the other hand, is like an angel, sweet, loving, incapable of any ill thought, quite naive, weak and easy to manipulate.  She only thinks about her adored fiance George Osborne, son of a rich bourgeois with great airs, another character of questionable personality. He is in the army. During her stay with the Sedleys, Rebecca tries to catch Amelia’s elder brother Joseph (“Jos”), a civil servant from the East Indies Company. Jos is quite gullible and was just about to propose to Rebecca if it wasn’t for William Dobbin, George’s friend and comrade from the army. Dobbin is a gentleman of very high moral and principles, and it’s deeply in love with Amelia, and looks after nothing but her happiness. Unfortunately for him, Amelia’s happiness relies on George, so Dobbin makes his job to get him “on track”.

After failing in her attempt to get Jos, Rebecca leaves for her position as governess at Queen’s Crawley. Sir Crawley has two sons from his first marriage, Pitt and Rawdon, and two daughters from his present marriage, the new pupils of Rebecca. Pitt, as the elder son, is heir  to the property and title, and it’s quite a dull and boring character. Rawdon is a player and a heartbreaker, a lot like George, but with better luck at cards games. He’s under the protection of a very old and very wealthy aunt, Miss Crawley. The entire family is after her fortune, but she has eyes only for Rawdon, and gets very attached to Rebecca, because she admires her intelligence and wit.

Basically, these are the main characters. The narrator keeps us up with the girls’ lives: Amelia is going to suffer a lot in the following years. Rebecca will, through wit, cunning and lies, keep herself on float for a long time, she’s a survivor and, despite her despicable personality, she’s very smart. Both will deal with a lot of struggles, and we see how they get through them in their own personal way.

The book, as it seems, is quite LONG but, in my humble opinion, is exquisitely written. It’s very FUNNY, and has a lot of scenes of pure comedy. I totally LOVED it.