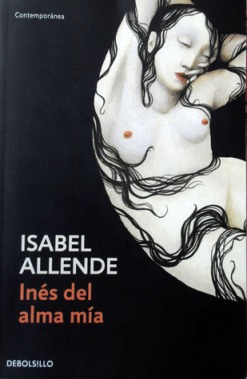 Born into a poor family in Spain, Inés, a seamstress, finds herself condemned to a life of hard work without reward or hope for the future. It is the sixteenth century, the beginning of the Spanish conquest of the Americas, and when her shiftless husband disappears to the New World, Inés uses the opportunity to search for him as an excuse to flee her stifling homeland and seek adventure. After her treacherous journey takes her to Peru, she learns that her husband has died in battle. Soon she begins a fiery love affair with a man who will change the course of her life: Pedro de Valdivia, war hero and field marshal to the famed Francisco Pizarro.

Valdivia’s dream is to succeed where other Spaniards have failed: to become the conqueror of Chile. The natives of Chile are fearsome warriors, and the land is rumored to be barren of gold, but this suits Valdivia, who seeks only honor and glory. Together the lovers Inés Suárez and Pedro de Valdivia will build the new city of Santiago, and they will wage a bloody, ruthless war against the indigenous Chileans—the fierce local Indians led by the chief Michimalonko, and the even fiercer Mapuche from the south. The horrific struggle will change them forever, pulling each of them toward their separate destinies. (from Goodreads)

I liked this book so much! In the last years I developed an interest for the Spanish conquest in the  American continent, but I haven’t read much since The Golden Empire: Spain, Charles V, and the Creation of America. Speaking of that book, even though it covers the Spanish advances throughout the entire continent, it’s mostly centered in what I believe where the biggest and most lucratives campaigns of Mexico and Peru. If I don’t remember wrong, Chile had a whole chapter, as it was quite related to Peru’s campaign, but it wasn’t as thorough as the main conquests.

I mentioned this because Allende’s book centers precisely in the conquest of Chile, filling that neglected aspect of the Spanish campaign. However, I must mark, unlike the 100% hard history content of The Golden Empire, Allende’s book is a very well researched fictional text.

Told from the point of view of Inés Suárez, a BAMF who is, apparently, usually overlooked by historians, it’s written as an autobiography. If you’re into strong female leads and historical fiction, this book will satisfy your wildest dreams (?), specially when you remember that the things that are told here actually happened (some of them, at least).

Once I finished the book of course I spent an entire afternoon (2 hours) reading in Wikipedia about all of these people. That’s how I found out that one of Valdivia’s BFF, Francisco de Aguirre, was the founder of Argentina’s eldest city to exist up to these days, Santiago del Estero. This is probably the most useless fact you’ll read today, but for the nerd that I am it was actually exciting.