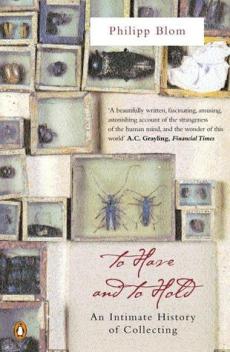 From amassing sacred relics to collecting celebrity memorabilia, the impulse to hoard has gripped humankind down the centuries. But what drives people to possess objects they do not use? To Have and to Hold is a captivating tour of collectors and their treasures from medieval times to the present, including a Tsar’s display of teeth, a caabinet containing unicorn horns, the macabre art of embalmer Dr Ruysch, the fabled mansion of Randolph Hearst, and the men who stockpile food wrappers and plastic cups. Blom’s eccentrics, visionaries and fanatics all provide an engrossing insight into why a pastime becomes an all-consuming passion. (from the back cover)

When I ordered this book I thought it would be mostly a sort of psycological or sociological essay on collectors and why they (we) collect, assumption that was corrected as soon as I began reading it. The book, however, was far from being a disappointment. Sure, it eventually got to those particular things I was hoping for (way past half of the book), but I think is mostly somo sort of “history” of the activity of collecting, mostly from the renaissance to this day: who and why gathered collections and what they collected through the ages, how some of those collections did or didn’t survive, and how the “democratization” of collecting came to be. From relics, to butterflies, to [sometimes embalmed] human remains, to art, to books, to mundane objects… almost any type of collection is represented in this book. I’m such a nerd for this subject, I can’t even put into words the joy I experienced going through these pages, mostly because it was written in a trully entertaining way, that you don’t need to be interested or versed in the subject to actually enjoy it.
I did get some of the juicy parts that I was expecting, but I found that some of there weren’t exactly new to me, because I got from other sources before. The weird thing is those other sources were barely mentioned, and I found that rather odd.
Anyway, great, and I still have to digg through the bibliography at the end, to have some further readings.